How “ROOF WASHING SERVICES” got started.

I was in the residential remodeling business for 35 years doing everything connected to homes including roofing. I landed a job to do a roof layover. A layover is the term used when you go over the existing shingles without stripping them off as long as they were lying down flat. The only issue was that there was moss and lichen on the shingles which had to be removed first. The homeowner said I could use his pressure washer. Well, it did such a great job, I had almost lost the new roof job but the homeowner still wanted a new roof including changing the color.

At the end of the day when I was driving home I was looking at roofs along the way, and saw that this stuff was everywhere. If it wasn’t on the front it was probably on the back, generally on the north side. So, that winter of 2014 I educated myself on moss, lichen and gloeocapsa magma, (black algae) bought the equipment needed and started “ROOF WASHING SERVICES” spring 2014.

The beauty about all this is, I can look at the home I just worked on and see the improvement and curb appeal that was done. It’s satisfying to say the least and the customers just can’t believe the results, not to mention the thousands of dollars saved on replacing the roof.

Roofs Can Be Cleaned - Guaranteed!

Family-focused business dedicated to protecting your roof and maximizing the curb appeal of your most important investment!

Based in Northborough, MA , we have served hundreds of families across Central Massachusetts, delivering high value, quality services, and a positive cleaning experience. 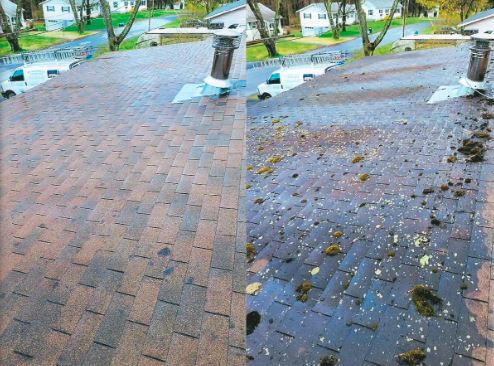